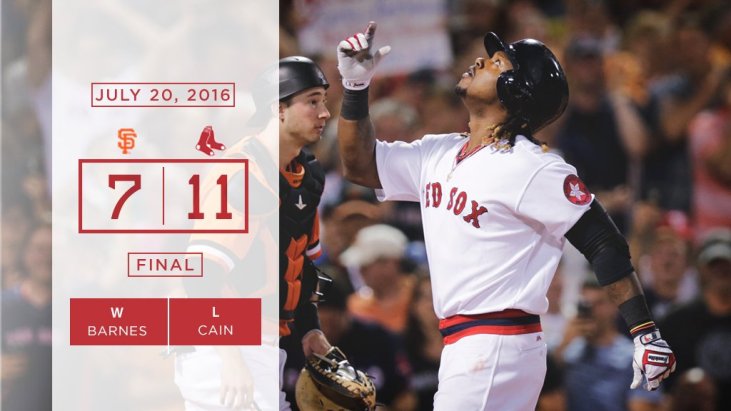 Drew Pomeranz sucks in his Sox debut, but Hanley Ramirez has himself a night to remember. I just want to start this article off with stating that I am not a fan of this Drew Pomeranz trade. Anderson Espinoza was the Red Sox top pitching prospect and scouts believe he was one of the best pitchers to come through the Red Sox farm system since Roger Clemens. Granted he has not pitched at the big league level yet and he is still an 18 year old kid, but this trade hurts. Fun fact for those that didn’t know this about Espinoza, at 17 his fastball was clocked at 100 mph. For a 17 year old kid that is just flat out absurd. With the comparisons to guys like Roger Clemens and Pedro Martinez, it sucks to see such a big prospect leave. With that being said, if I was told we were going to trade Espinoza I would have expected to get bigger name than fucking Drew Pomeranz.

If you take a quick look at his career statistics (6 years), one would think those numbers would make you second guess trading away your top pitching prospect for a guy who has only had 17 game stretch of quality pitching. The Red Sox had to pay a substantial price for getting Pomeranz and let’s just hope Dave Dombrowski knows what he is doing.

Fast Forward to the 3rd inning of the ball game…. I don’t know if I will ever be on board with this trade. 3.0 IP, 8 hits allowed, 5 runs, 5 of them were earned runs, 2 walks, and 2 Ding Dongs. 3 INNINGS?! 3 FUCKING INNINGS? This has to be a joke right? We trade Pedro Jr. for this guy? We already have to deal with Clay Buchholz’s shenanigans, E-Rod telling the opposing players what pitches he is going to throw, and we are still waiting on David Price to be better. The last thing we need is this new guy to come in and pitch just like the rest of our mediocre pitching staff. All we can hope for is that the nerves got the best of him last night and that he can bounce back from this horrendous outing. One last bit about Drew, you better go thank Hanley for having your back.

What’s a better way to start your morning than to watch @HanleyRamirez mash again, again and again?https://t.co/eVgnEY33FA

Holy shit Hanley have a day! The story of this Red Sox season has been all about the offense and yesterday was no different. Hanley MURDERED the ball last night. Where has this guy been all season? I think we could use a little more of this Hanley.

The Red Sox picked up a huge W. I can’t believe I am saying this, but thank you Yankees! That is right boys and girls, the Sox are in sole possession of 1st Place

On that note, HIT THE MUSIC!