SOURCE–   Recognizing that Utah Jazz forward Gordon Hayward will be a potential free agent this offseason — and given his Butler University connections to Boston coach Brad Stevens — Celtics fans greeted Hayward with some audible cheers during lineup introductions before Tuesday’s game at TD Garden.

That didn’t sit well with Celtics forward Jae Crowder, who just so happens to play the same position as Hayward.

Crowder responded with maybe his best game of the season, scoring 21 points on 6 of 8 shooting, while making all but one of the six 3-pointers that he put up over 35 minutes of floor time as part of Boston’s 115-104 victory.

After the game, Crowder sounded off, both in the locker room and on social media, about his perceived slight from the fans.

“I heard the cheering before the game. I didn’t like that at all,” said Crowder. “I think that was a sign of disrespect to me from the fans. That sparked a little fire in me.”

He then took to social media to again voice his displeasure.

HOME TEAM FANS CHEERING FOR THE OPPOSING PLAYERS NOW.. AW MAN OK… SMH BUT GOOD WIN FELLAS ONTO THE NEXT ONE.!! 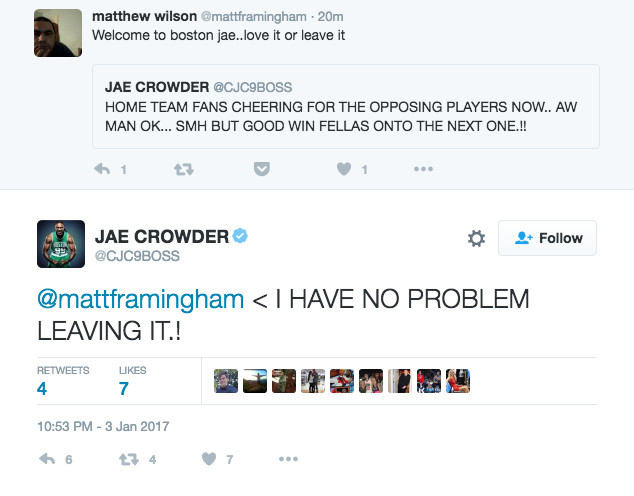 Like most things on Twitter dot com, I think this has been blown out of proportion. Everyone knows that Jae is an emotional player and he has a fiery personality, thats why we love him so much on the court. And I can totally see where he is coming from. I wouldn’t be too happy with the media and fans looking for my replacement either. If it is trying to get KD, drafting Jaylen Brown, or cheering for Gordon Hayward while we are playing against him. So I can totally see where Jae is coming from.

The people who cheered for Hayward are the same people who booed Durant. They are fucking morons. And don’t even get me started about the fucking assholes who came at Jae last night on Twitter. How can you call yourself a fan but then attack your team’s players to the point that they would think about wanting to leave? Hate to break it to those assholes, but you are hurting the team. Players aren’t going to want to stay and no one is going to want to come.

Jae has deleted the tweets from last night so I hope he calmed down and will just use this as motivation. It would be a shame for a couple of dumb twitter trolls to have Jae wanting to leave Boston.

🤔 I HEAR YOU GUYS! #MOTIVATION